Actress Tantoo Cardinal's Movies & Shows That Might Please Her Ancestors

Actress Tantoo Cardinal's Movies & Shows That Might Please Her Ancestors 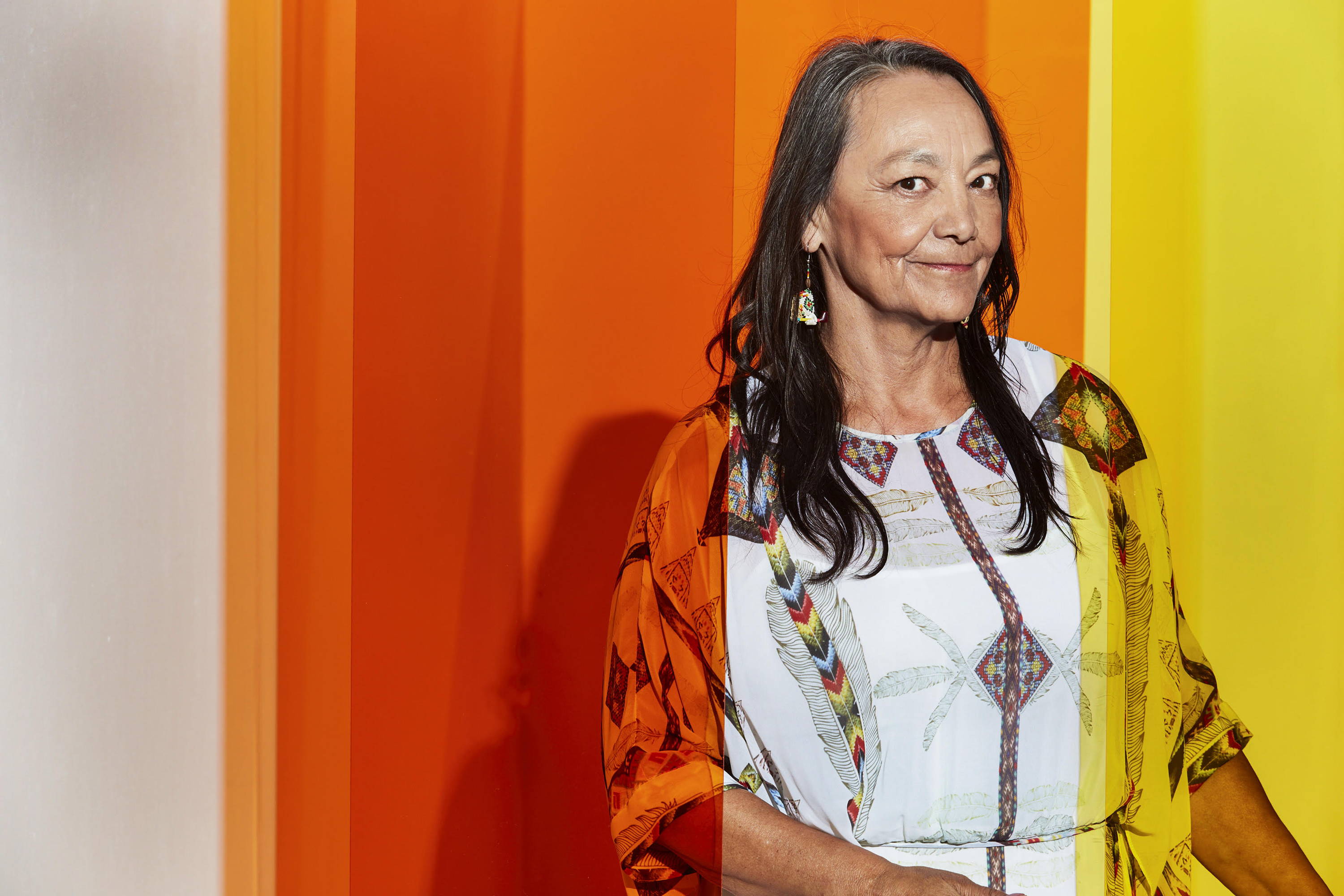 Hollywood’s history of casting Native Americans on screen hasn’t been too impressive, notes internationally revered—and indigenous—actress Tantoo Cardinal. “I mean, you once actually had Audrey Hepburn sitting there playing an Indian,” she says, referring dryly to 1960’s The Unforgiven, an obviously dated western headlining Burt Lancaster and directed by John Huston.

“I like Sue Lynn’s toughness, her strength and her sense of justice,” says Cardinal. Asked to reflect on the rarity of her role, the actress quickly shows she’s not too different from her series alterego. “There is this psychology in this country that (Native Americans) are dead, that we're just history and not important. But there are a lot of people who are not even indigenous, or from the First Nations world, who are really touched by who we are, where we come from. So our stories have some validity.”

Cardinal—who, next Spring, will be honored alongside Ryan Reynolds and Catherine O’Hara at the Governor General’s Performing Arts Awards, Canada’s equivalent of our Lincoln Center Honors—is a walking epic herself.

Born in snowy Fort McMurray, Alberta, and raised in the tiny nearby burg of Anzac, she was just six weeks old when her Caucasian dad left her mother Julia, who was descended from the indigenous Cree and Métis peoples. About five months later, an overwhelmed Julia, who had taken jobs to support the family, handed Cardinal and her two older siblings to their grandmother—and died in poverty soon after. “My mother's stepdad was an Englishman, and he must’ve insisted that she worked and pay for our keep,” says Cardinal, whose first name is actually Rose Marie (her “granny” nicknamed her “Tantoo” after a bug spray brand). "So I never had the opportunity to meet my mother.”

Along the way, Cardinal also lost her brother (he was murdered at 24), and lost touch with her sister, who was thrown into the foster care system and adopted.

Amid the early turmoil of her life, Cardinal found a safety net of sorts in her late teens when, having moved to Alberta’s capital Edmonton, she joined a group of aboriginal-rights activists. In 1971, a fellow rebel-rouser got her a small part as a “native” in a TV historical doc about a frontier-era missionary—and she found acting, her “life’s purpose.”

More small local parts turned into bigger local roles, and in 1981 she got her first glimpse of movie stardom via the potboiler Death Hunt. Charles Bronson played a trapper, Lee Marvin a Mountie (!), while Cardinal appeared as, er, just “Indian Woman.” At least it was Cardinal, not a neo-Audrey, in the role. “When I first started, I would sit in audition halls with all these white actresses in brown makeup and wearing their turquoise jewelry,” Cardinal recalls. “But some people were starting to look for something more authentic and get away from the shame. I was encouraged. I thought, I don't know much about acting, but I can catch on—and at least I'm Indian!”

After winning a Genie (Canada’s equivalent of the Emmy) for the 1986 TV movie Loyalties, she gave Hollywood a shot, living in the quaint, close-enough foothill town of Sierra Madre.

“I sent out 40 resumes and photographs to different agencies, trying to get somebody who might represent me here,” she recalls. “Not even one response.” Undaunted, she attended a Screen Actors Guild meeting of Native American members and met casting director Elisabeth Leustig, there on a mission to find the right actors for star-director Kevin Costner’s western Dances with Wolves.

Since, it’s been a steady stream of credits. She was Jane Seymour’s Native American bestie Snow Bird on Dr. Quinn and outlaw medicine woman Marilyn on Longmire, and she recurred in Jason Momoa’s two most recent TV star vehicles (Frontier, See). She played the titular speechless woman in Sam Shepard’s Silent Tongue, a grim western starring River Phoenix, and Brad Pitt’s mother-in-law in Legends of the Fall. Cardinal’s also been a formidable stage presence in Canada, earning raves as Gertrude in Hamlet and even overseeing an indigenous-peopled production of The Vagina Monologues.

She’s been peripatetic in her personal life, too, bouncing from Canada to LA to South Dakota to Vermont to Toronto across three marriages (one to John Lawlor, who played the headmaster on the ‘80s sitcom The Facts of Life). In 2011, she and Margot Kidder were arrested outside the White House while protesting the Keystone oil pipeline, which she says has helped “ravage” her birthplace and brethren. “It's so hard coming back from genocide and colonialism and clearing the debris.”

Break out the proverbial fork lift. Cardinal is starting a film acting school in Canada, enjoying her new clout as an Oscar voter, and preparing a one-woman show. “In this new chapter of my life,” says the mom of three grown kids (including rising actor and playwright Clifford Cardinal), “there's an enormous whirling of new ideas that I never had the courage (to execute) before.”

She does make time to kick back in La La Land, where she’s been living again since July. “I like it here. It’s kind of fun for my friends and family who want to come this way.”

And Cardinal still keeps a look out for messages from the ether. She recently lost a dear friend of four decades. “I said, ‘When you get to the other side, tell me what it's like. And she said, ‘All right, I will.’” Apparently her pal’s spirit made good on the deal. “She came by and said, ‘I love it there. I sing all the time.’ I said, ‘Are you a bird?’ And she said, ‘Sometimes. But I travel on the light of love.’"

In 1863, heroic Union soldier John Dunbar (Kevin Costner) finds kindred spirits in a group of Lakota Sioux and falls for Stands with a Fist (Mary McDonnell), a white woman they adopted as a child. Will love prevail? “The movie came with a great feeling of hope, in that (Native Americans) were at last being portrayed very differently,” says Cardinal, who plays McDonnell’s makeshift mother. Wolves “changed Hollywood and emboldened some of our actors and filmmakers.”

Cardinal stars in this acclaimed you-can-go-home-again tale as Mary Birchbark, a famous blues-rock singer (complete with a raspy voice a la Bonnie Raitt) who feels her life is becoming “destructive.” What to do but head back to her grandmother’s home on a reservation in the (gorgeously filmed) Arctic? There, she gets in touch with her roots and leads the charge against a mining company that’s polluting the local waters. Says Cardinal: “It's an art film, so it's a different metabolism. It's not about the world she left, it's about her coming home.”

Reformed 1870s outlaw Roy (Jack O’Connell of Unbroken), on the run from mentor Frank (Emmy winner Jeff Daniels), escapes to La Belle, New Mexico—an aptly-named town, considering most of the residents are women (a mining accident killed their men). Roy becomes smitten with Alice (Downton Abbey’s Michelle Dockery), befriends lesbian Mary Agnes (Merritt Weaver, another Emmy winner here) and Alice’s Paiute mother-in-law, Iyovi, too. The producers “gave me a certain amount of freedom to create my little world there,” says Cardinal, though she wishes the writers had given her character “more bones.”

In this decades-spanning drama, U.S. colonel William Ludlow (Anthony Hopkins), disgusted by the government’s treatment of Native Americans, ditches the army and decides to raise his sons (Aiden Quinn, Brad Pitt and Henry Thomas) in the wilds of Montana circa 1900. Cue the romantic intrigue, war, tragedy—and Cardinal as the Cree mother of a pivotal character. “I had a great time making this,” she says. “Being on a set with Anthony Hopkins and Brad Pitt and Aiden Quinn, that was a real treat. And (the Native American characters) were definitely a part of the story.”

No longer stuck with their parents on a reservation, four young Mohawk women (all played by indigenous actors) live it up in Montreal in this popular Canadian dramedy. Actual Mohawk girl Tracey Deer, who based this comedy on her same-titled 2005 documentary, dubbed the series “Sex and the City for the Native set.” The show “definitely gave some young people lots of opportunities,” says Cardinal, who plays mom to one of those girls. She laughs. “When I was cutting my teeth, it was in industrial films. One on fire prevention gave us a little bit of drama to play with.”

For once, Cardinal is proud to play a character “who has accomplished great things.” Another bonus: “We have just an ace cultural consultant, Joely Proudfit (an American Indian Studies professor at California State University at San Marcos). She advises about the way the Indian world works (compared) to the world outside of the reservation world. There is a difference.”

This tuneful, fact-inspired flick follows The Sapphires, an all-female Australian Aboriginal ’60s pop group that winds up performing in Vietnam for their nation’s troops. Chris O’Dowd charms as their goofy manager, but Cardinal says the story—based on a play by the son of one of the actual group’s members—is the thing. “There's so much talent in our communities—musicians and singers and songwriters. Hollywood doesn’t know that.” The actress doesn’t pop up here—she’s just a fan.

Ornery lumberjack Noel Lord (the late, great Rip Torn) and his eccentric Abenaki love Bangor (Cardinal) aim to fend off a power company from taking over their land circa 1927. Their chief foil: A snooty CEO played by Michael J. Fox! Meanwhile, Cardinal brings “a freshness rarely seen on screen,” raved a critic in The New York Times. “She is so tough and blunt that when she begins to cry about the children she never had, it becomes clear that emotion has been a luxury in her hardscrabble life.” Says Cardinal today: “Every character you do has to have an element of who you are. Bangor—I just loved her.”