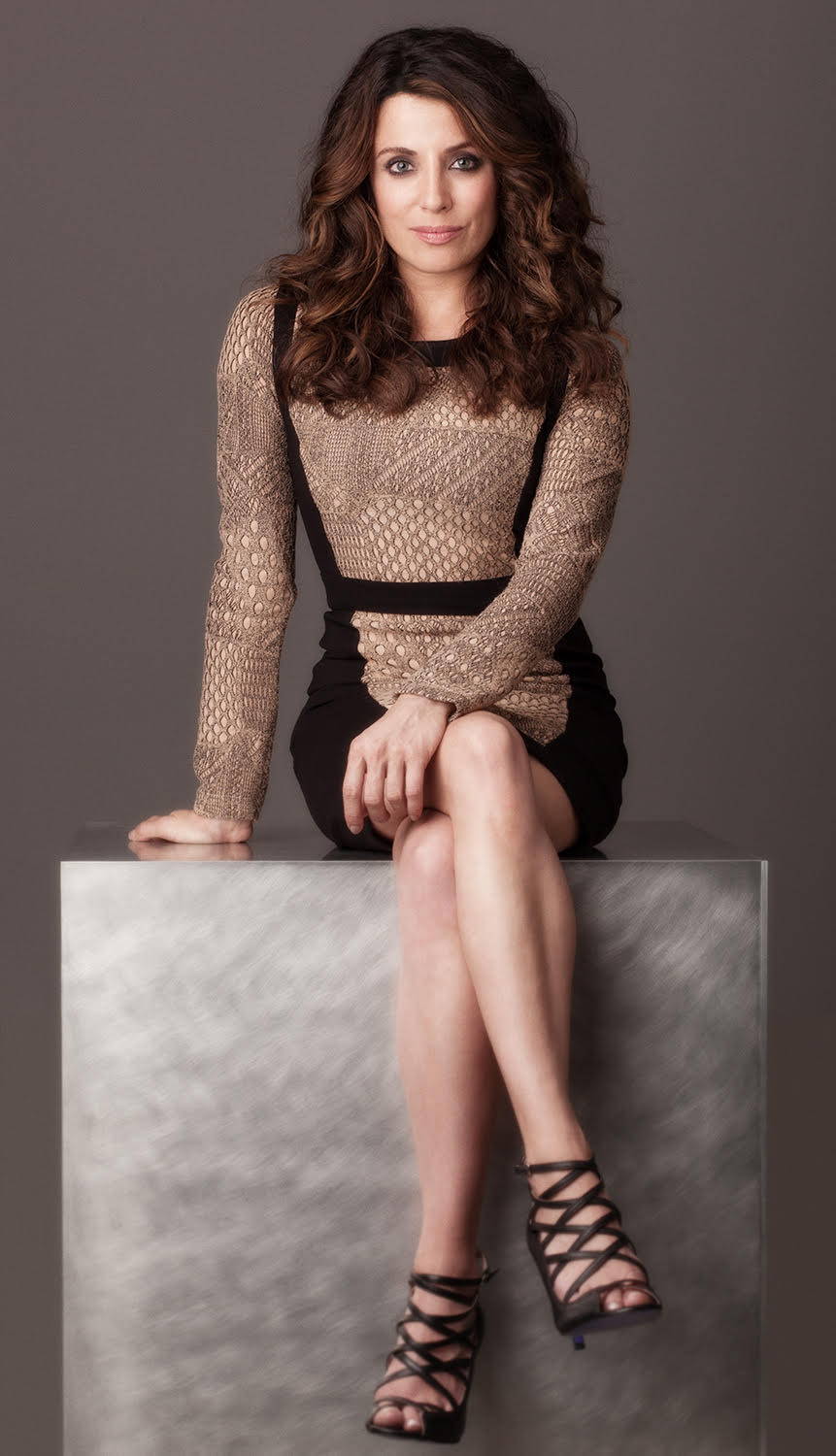 Before being considered for the part, Ubach barely knew of Pirro, a former New York judge turned political lightening rod.

“I Googled her and realized, Ohhhh, I think I can do this,” says the actress, who learned Pirro is a “highly accomplished woman, very quick on her feet.” While Saturday Night Live funnywoman Cecily Strong’s take on Pirro counts as spot-on shtick, Ubach had the tough task of grounding the outsized commentator.

“She came from Lebanese-American Catholics and grew up in upstate New York. So she must've felt marginalized growing up. How can anyone be that obscenely driven without having this desperate need to prove themselves?”

Ubach can relate a bit. First off, her father Rodolfo was born in Puerto Rico, her mom Sidna in Mexico—but Ubach and her sister Athena were born and raised in the then very white Los Angeles suburb of Downey (their dad, who passed away in 1995, owned a lithograph shop; Sid was the bookkeeper). And, while she missed getting to know local heroes The Beach Boys, “I grew up around the corner from the Carpenters. I would see Karen around a lot. The family would give out dollar bills on Halloween, so we thought they were very fancy.”

Take that proximity to fame (Metallica frontman James Hetfield also hails from Downey), add in some genetic moxie (her paternal granddad fled Franco’s Spain; “Ubach” is a Catalonian surname), and the woman was fairly destined to crave stardom.

“At four, I was dying to be on Romper Room.” At the time, the LA edition of the popular TV kiddie show was hosted by Socorro Serrano, the franchise’s first-ever Mexican-American host. "My mother called up the producer and suddenly I was on the show!”

When Serrano asked if Ubach would like to play her daughter in a little indie flick, “I basically told my mom to get me out of school and make it happen! My mom and dad were just so humored by the fact that I wanted to be an actress. Through an immigrant's eyes, you can accomplish anything if you put your mind to it.”

By 10, she had an agent. Soon, she was studying alongside “Tony Bennett’s kid Antonia and little Angie Voight” (now known as Angelina Jolie) in a youth program at West Hollywood’s Lee Strasberg Theatre & Film Institute. Then, at 15, she landed the big part of detective Victoria Principal’s opinionated daughter in an ABC drama pilot—and has kept working since.

And moviegoers know her as buxom caterer Isabel in Fockers and Serena Magquire, Reese Witherspoon’s bangs-proud pal, in those Blonde comedies (she reprises the role in another sequel coming next year). Her biggest role pre-Bombshell: Voicing—gorgeous singing chops and all—as matriarch Imelda in Pixar’s Oscar-winning animated smash Coco. (Ubach, we should note, sidelines as one of animation’s top voice artists).

Ubach is on a break from another juicy role—she recurs as a cunning mystery woman in Fox’s new Dynasty-type soap Filthy Rich—tending to her son Thomas Rodolfo, age 2 (dad is Grammy-winning multi-hyphenate Thom Russo). Actually, during her Caavo chat, the boy is "downstairs with his grandma. She's reading him bedtime stories before his nap time,” Ubach laughs. “We like to put her to work the moment she's in town.”

Below, get to know a little more about Alanna and her family—and see what fam-friendly movies and shows she recommends for cozy holiday viewing.

Your musician-husband Thom has worked with everyone from Cher to Enrique Iglesias to Jay-Z. Will you ever do an album with him?

We would love to. As soon as our kid gets a little older and we stop changing diapers!

Where do you think you get your love for performing?

Mostly my mom and dad. They always had season tickets to the Hollywood Bowl, to every show in town, and they would bring Athena and me with them. Frankly, they were workaholics. The only time that they would really unwind was when they were at the theater, at the movies or watching television. Well, my father did love to gamble, so he would fly the family out to Vegas any chance he could. When he would get lucky at the crap table, he’d get us dinner seats, front row center, to see all of the great shows like Captain and Tennille, Donny and Marie Osmond, Wayne Newton, Charro. I thought, That's what I wanna do! I wanted to be part of the lights and the cigarette smoke and the smell of prime rib.

Oh, my God. When you grow up in a Latin family, you just have to accept the fact that your parents are going to fight in front of you. That's just the way it goes. So they were hearty and always expressed their emotions. That’s what helped me become an actress, and helped my sister become a therapist. My dad would have been so proud to see me in this and that and the other.

Is your mom a showbiz fan?

She’s a walking encyclopedia of showbusiness! Every time we would see a movie, she would tell us something she read about the (star). “So-and-so's in Mensa, I'll have you know. She's not just another pretty face!” I always bring my mom into every character I play.

On HBO’s jaded-youth drama Euphoria, you play partying single mother Suze. Do you know anybody like her in real life?

Oh, this role was dedicated to all the mothers I thought were so cool way back when because they were lenient and didn't give curfews. Then years go by, you look back and think, That mother was actually quite neglectful! Suze—she's clinically depressed and wants to be young like the girl she's raising.

What kind of mom are you?

I would call myself a Disneyland parent, while my husband is the disciplinarian. It’s exciting to know that my son will one day sit down and watch all of my cartoon characters and say, “Oh, that's my mom behind that cat or dragon or skeleton.”

Speaking of colorful characters, any blowback from Jeanine Pirro via Twitter?

If I meet her in person, if we're both at Zabar’s deli, and she punches me in the face, so be it. She'd probably say something like, "I would've played it much better than you!"

Okay, this animated Peanuts outing is a half-our TV special, not a movie—yet it’s so epic, it remains must-see holiday viewing over 50 years after its first airing on CBS. Of course, like every fan, Ubach feels for little Charlie Brown as he seeks to find the true meaning of Christmas. But back as a kid, “It was just all about eating bottomless bowls of Captain Crunch while enjoying my best friends Peppermint Patty and Linus.”

In this nostalgic treat, a grown-up Ralphie looks back to the ‘40s, when his beleaguered parents (Darren McGavin, Melinda Dillon) struggled with everyday woes—only to provide his bullied younger self (played by Peter Billingsley) with one very memorable Christmas. “I wanted that family to adopt me when I was a child,” says Ubach. “They have fancy lamps and get to dress like bunnies and eat Chinese food on Christmas. Everyone they will laugh at this movie. It is so much fun and the acting is superb.”

A modern animated classic! Poor little Miguel: He wants to be a world-class guitar player like his great, great grandfather, but his grandmother Coco forbids it. Apparently, the long-gone guy was a lout, something Miguel sets out to prove wrong when he visits the magical Land of the Dead and meets many of his ancestors, including the amazing Imelda (voiced by Ubach!). “The movie’s all about the importance of family and never forgetting those who passed. Even your cynical uncle who smells like bacon and unfiltered Camels will cry.”

“Sunrise, sunset!” In 1905 Ukraine, Jewish Tevye (Topol), a cash-strapped milkman, yearns to hold on to family and religious traditions, even as the Russian aristocracy and anti-Semitism threaten to destroy it all. Making his life even more difficult in this vibrant adaptation of 1964’s smash Broadway musical: His three daughters, refusing an arranged marriage, all seek love. “What a jewel of a movie,” says Ubach. “The music is haunting. And Topol embodies the perfect human being in my eyes. He is fearless in his emotional expressions. I'm convinced he hibernated for about a year after that movie shoot!”

This dazzling musical-romance, an Oscar winner for best picture, stars Leslie Caron as novelist Colette’s titular gamine navigating Paris’ male-and-courtesan-dominated society circa 1900. “This movie has everything you want: Brilliant performances, beautiful Leslie Caron and unbelievable music.” Granted, the familiar “Thank Heaven for Little Girls,” sung by an up-there Maurice Chevalier, is a little ... how do you say ... dated. But “Say A Prayer for Me Tonight,” with Betty Wand dubbing for Caron, “is one of the most beautiful songs ever written.”

It’s a Christmas-set lovepalooza! The love stories of about 10 couples unspool in this hugely popular mega-romcom. “Every character is so layered and memorable,” says Ubach. “And I have such a mad crush on Billy Mack (the aging rock star character played by Bill Nighy)— the way he dances while sitting on a stool at the recording studio.” She also loves the storyline that shows betrayed writer Jamie (Colin Firth) falling for Portuguese housekeeper Aurelia (a “heartbreaking” Lucia Moniz). “It’s just a magical movie.”

In this follow up to the 2000 comedy Meet the Parents, Greg Focker (Ben Stiller) introduces his somewhat conservative in-laws (Robert De Niro, Blythe Danner) to his own—uh,oh—touch-feely parents (Dustin Hoffman, Barbara Streisand). Adding to the awkwardness: Ubach as Isabel, the family’s hotsie-totsie housekeeper turned hired dinner-party chef. Parents, Fockers and another sequel, Little Fockers, “will make everyone crack up. Watch them all and see if you can find me. I'm the Easter egg!”

The orphans, thieves and kind folk of 1830s London in Charles Dickens’ Oliver Twist are brought to vivid life in this movie version of the early-‘1960s stage hit. Will poor, parentless runaway Oliver (Mark Lester) turn to a life of crime under the tutelage of the Artful Dodger (Jack Wild of H.R. Pufnstuf)? After seeing this Best Picture Oscar winner on TV as kids, “My sister and I wanted to smudge dirt on our faces and go pickpocketing,” says a laughing Ubach. “I remember my mom telling me Jack Wild was a very talented and successful child actor who won awards. And I thought to myself, Hmm, I guess I could be an actor.”